Last week we talked about “sell in may and walk away,” but wow crypto sure didn’t waste any time selling off again. It was mostly a week of down across the board. Wednesday the 19th was the worst of it with BTC dropping -25% on that day alone. The result of that drop was a pretty significant dead cat bounce that even produced doubles if you got stink bids filled on names like ONT or EWT. However, by Thursday the selling had resumed for most of the crypto market.

I guess Brian means it when he says a weekly M is a big deal. We saw that M confirm in BTC last week and that resulted in a sell off from where it opened at 46k down to a low at 29k before catching a bounce back up to where it closed at 35k. Now we’re just sitting at the 50% level and it does still look kind of heavy.

Obviously there were some FA drivers for this sell off with Mr. Musk up to his business but the technical reasons were there as well and did give a pretty good signal that we should’ve been paying attention to. If you’re in the school program and haven’t seen this before, make sure you take a look at the weekly bearish El Tangonator that started rearing its head on BTC with OBV, RSI and MACD bear div confirmations going back as far as the week of February 22nd for RSI.

Ethereum lost -41% of its value over the last week and closed at $2100 and caught up with BTC on the downside after hanging in 2 weeks ago when BTC first topped out. Unlike Bitcoin, there is no weekly M and very much a V top. This is a good sign that it will have to eventually move back up to the top of the range to test the highs again. There is a confirmed weekly RSI div but not in MACD. Interesting that it did make it’s way down to the top of the RLZ and bounced off 61.8 Mountain Man. The trading range is massive and currently between the $4400 high and $1700 low. There was similar action in the DeFi space with most of those names coming off heavily.

So is this a buy the dip moment? That’s a tough one to argue right now. For BTC and ETH I’m not seeing any real sign of a bottom yet and really we’re not seeing buyers step up in earnest down here at the moment. You know we love Reload Zones at TRi and so far neither have made it down there when you consider the range from the lows last year up to ATH. Also, I like to see a MACD divergence and there isn’t even the beginnings of one forming. Personally, I’ll be waiting for dips down to RLZ before I consider any new investment buying programs. Of course it’s always possible we bounce here and head higher and I don’t get that chance. In that case I’ll be hunting trend continuation with things like BoT setups.

While there were signs of a top, the magnitude of the drop took me by surprise and I think a lot of people weren’t expecting Bitcoin to come down as far and quickly as it did. If anything I think it’s a good sign that we ripped the band aid off so quickly. We’ve gotten down to near respectable levels and hopefully now it just takes some time to clean up and set a new base for another move higher. I much prefer that as a bullish scenario as opposed to a slow grind down that could last many months. At this point I think it would be bad if we quickly bounced right back up to the top of the range as there will be many people looking to sell if that happens. A few months of sideways action seems likely and I’ll be looking for a W to come in and tell me the bull is driving the bus. For now I think being patient is the best course of action. It’s always a good idea to let the market tell you what direction it wants before making any big decisions. Knife catching at these levels is risky and not worth the stress.

Alt coins are definitely looking interesting. A lot of the fluff has been quickly taken out of these coins and many are down in their RLZ. I’ve already nibbled on a few names vs. BTC like LINK and OMG. These were both shark setups buying a check of the previous W breakout. My list is building and I’m going in and taking some more small nibbles in alt coin land. Things like LUNA and DIA look very interesting to me.

Of course we could lose these lows and continue down and obviously I have no idea what’s going to happen but as always I’m not going to take a lot of risk and I’m putting myself in a position to add more to these trades later on if I get the opportunity to buy cheaper. These trades are part of my LoL Strategy and I’m not in any hurry for them to do anything. I’m also risking to zero and will not be shaken out by any stop runs. I think that sometime down the road I will get an opportunity to sell half on a double and create a free position for myself. Will that be soon? Maybe but likely not and I’m more than happy to wait. For now I’m nibbling at the bottom of ranges and afterall I would be doing a disservice to myself if I didn’t and least take a shot at these levels. At least I’m not buying at the nosebleed prices of  just a couple weeks ago. Brian’s constant reminder of DON’T CHASE could never ring  more true than after what has just happened.

I’ll leave you with this alt coin index created by Level 1 TA Sharky and ask, Does this look like a top or a bottom to you? 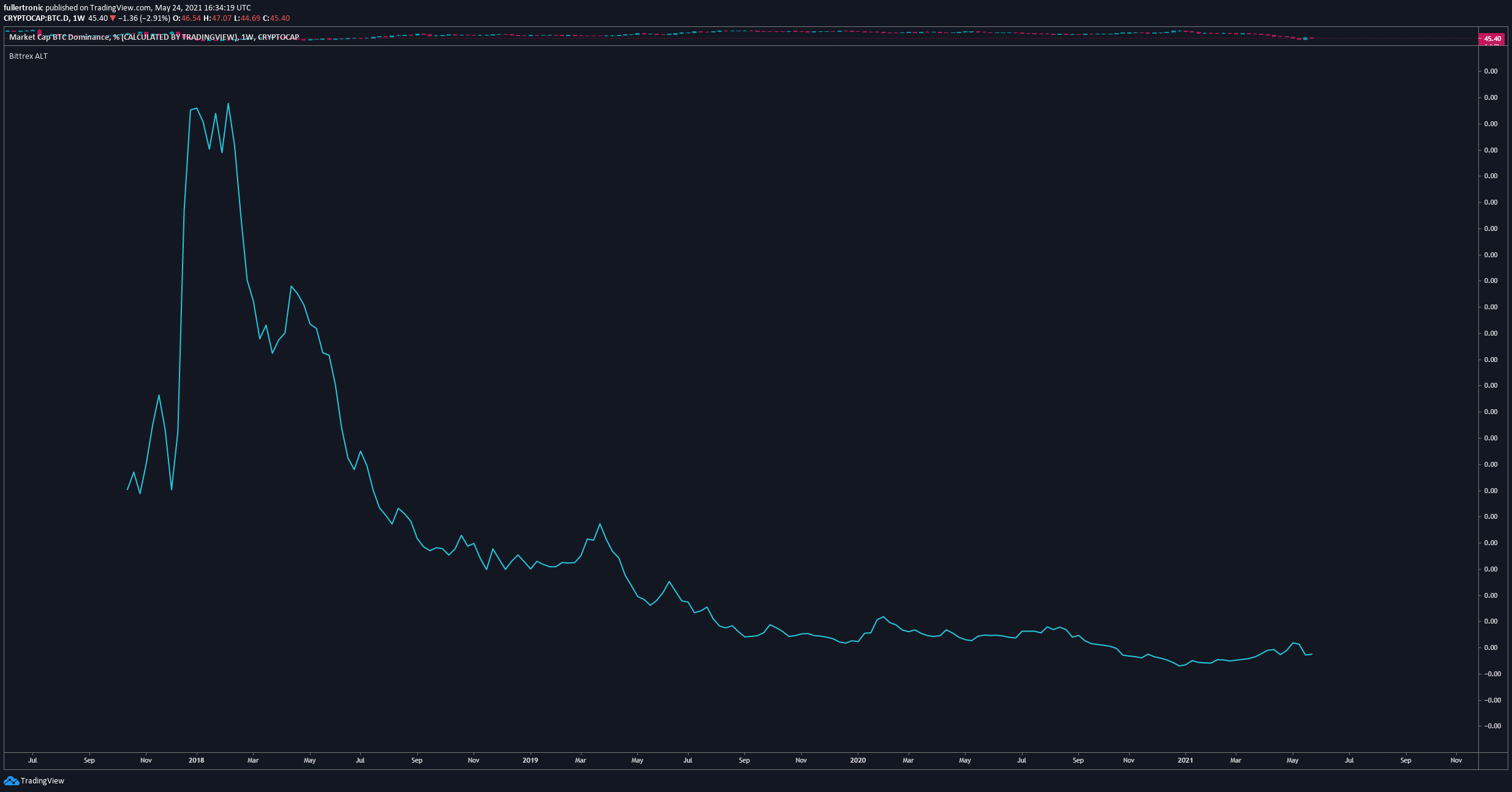 Be safe out there. As always this is just my opinion and what I’m up to at this game. It is not financial advice. I’m full of my share of wrong ideas and mistakes so take it with a grain of salt. Consult with your financial professional before doing anything in the marketplace and make sure you are working from your own trading plan. I’m just doing my best and trying to have fun. Hopefully I’ve brought you something of value along the way.