TRI's School Program is in Session.
Get on our Waitlist Here!

Should You Rely on the January Barometer To Predict The Market

January has almost passed, and investors are looking ahead to what 2022 will bring. If you have experience in the markets, you’ll know the concept of the January Barometer, and in this post, we’ll dig a little deeper into this theory and try to understand it.

It’s impossible to predict the market, but every investor still wishes to know the future. Traders' desires to know the market’s future have resulted in many theories and concepts springing up over decades. The January Barometer theory states that what happens in January, so goes the year.

Many traders believe the S&P500 performance during January can mirror the performance of the market over the coming year. Since we live in a fractal world, the first minute, hour, week, and month of the year often act as a microcosm for the rest of the year. If January has a terrible month, the markets for the rest of the year will also suffer. If January brings us those long-awaited gains, further gains will follow as the year unfolds.

The theory of the January Barometer was first put forward by Yale Hirsch in the Stock Trader’s Almanac in 1972. Those who adopt this theory into their own investment strategies cite data showing that between the years 1966 and 2001, there has been an inarguable correlation between the S&P 500 returns in January and those of the rest of that year.

How can the January Barometer predict where the market is going?

We may find the answer in the investment practices of many major investors, especially institutional investors. January is the month when most investors will readjust their portfolios, rethink their outlook for the year to come, and attempt to make a fresh start. Many institutional investors lock in profits prior to the year ending and then reopen their positions in the new year. Because of this capital flowing into the market and many large portfolios being readjusted, the moves made in January may predict where the market will point during the following year.

Whilst there is indeed a correlation between January returns and the returns experienced for the rest of the year, it is important to factor in that, as a general rule, markets are always trending upward. It is possible that the concept of the January Barometer is the product of human psychological illusion. To support this school of thought, critics cite that during the same years of 1966 and 2001, the U.S equity markets generated an annual return of 75%. So, we could simply explain the January Barometer as a byproduct of the general upward trend that the S&P has moved in for decades.

Now the month of January is over, we can look at the full month to get an idea of how the year may go. The market moved violently to the downside coming into a gap that was left in the chart in October of last year. The move was so violent it gapped again to the downside, breaking all the lows of September/October 21'. The move was extremely fast and quickly bounced back to fill the newly formed gap. From there, the market put in a bottom, and into the end of the month, it confirmed a large W market structure bottom.

They say "As January goes, so goes the year" and in mid-term election years, the markets have often been sideways or down years. This January Barometer has created a similar outlook for this year, with violent moves to the downside, plenty of sideways ranging, and ending off the year with a push to the upside. If this plays out in the year, then the year's bottom would coincide nicely with the mid-term elections, with the first bottom coming in September, and the double bottom coming in during the midterm elections in early November.

The outlook for this year looks eerily similar to other Midterm election years as shown in this year's Stock Trader's Almanac. (Credited and linked below) 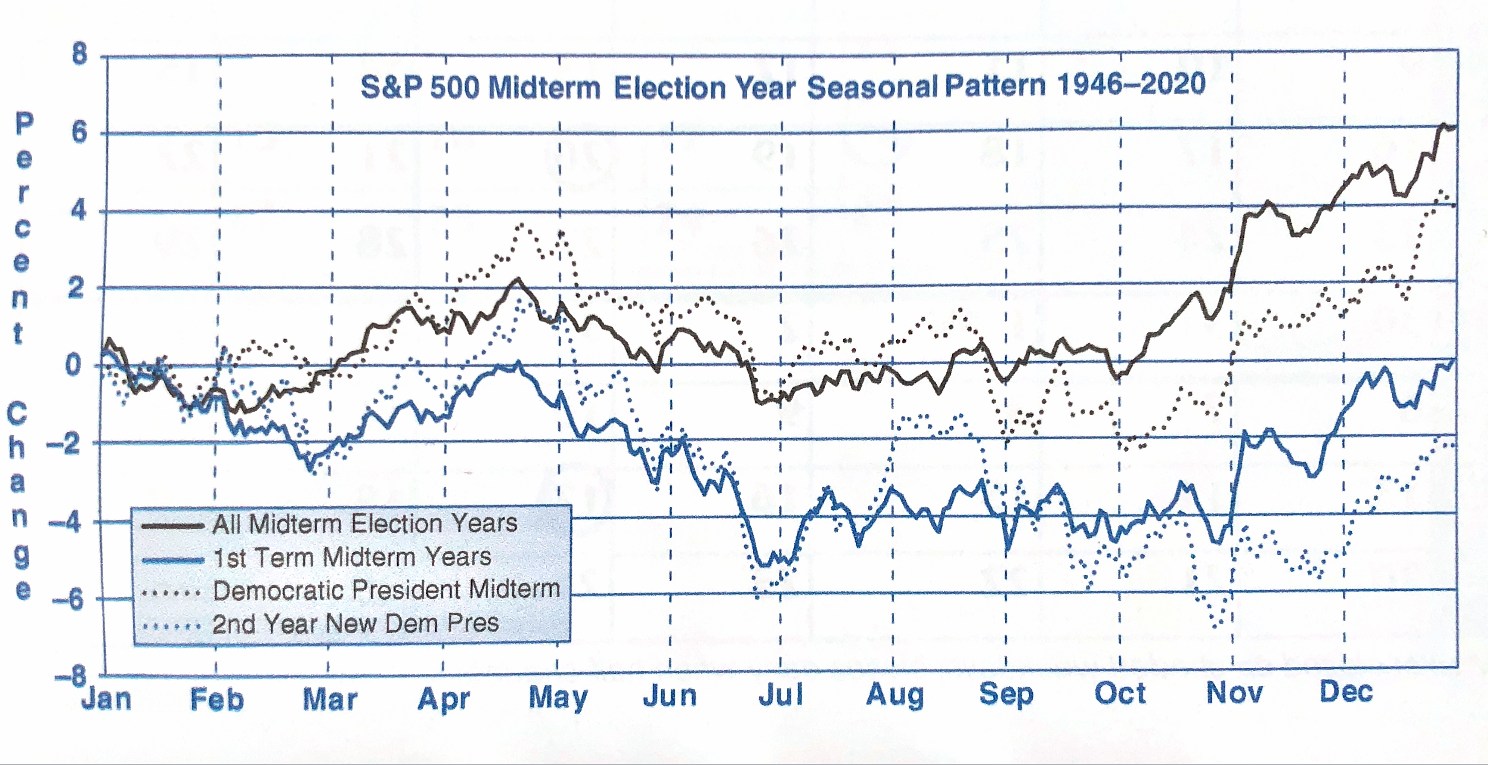 There are no guarantees in any market, this is just another statistical tool to help you understand where the market may go in the coming year, and what you should expect.

That's all for now, see you on the site!

what a cool report!