TRI's School Program is in Session.
Get on our Waitlist Here!

The TED Spread: What It Is & Why It Matters 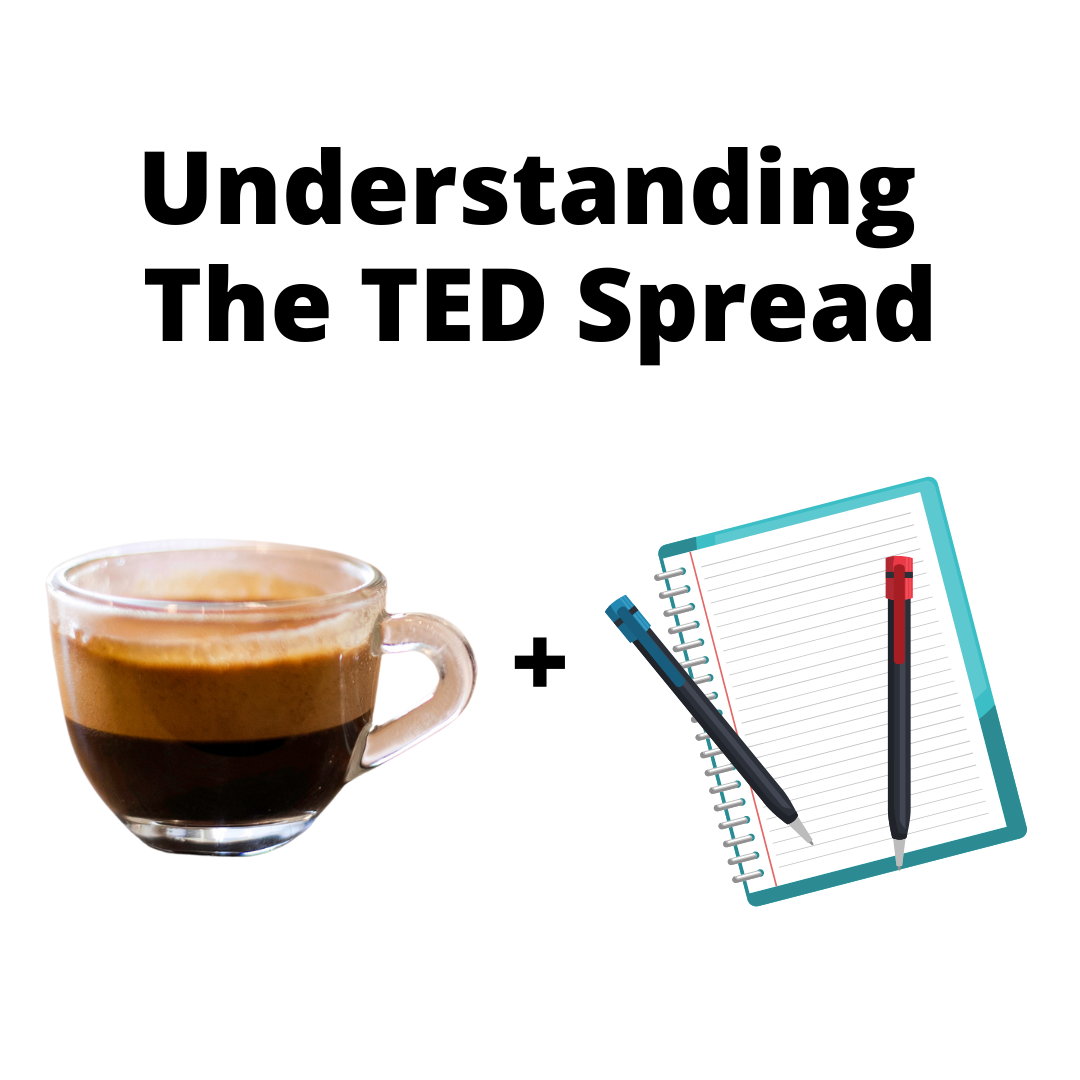 I recommend accompanying this article with your journals open and a triple-shot espresso. Now you're ready. Let's talk about the TED Spread. Buckle up.

The TED spread is the difference between 3-month U.S. Treasury bills and Eurodollar rates (LIBOR: London Inter-Bank Offered Rate). You can use it to measure the perceived credit risk of lending to banks or corporations. The TED spread is often a tiny amount, say around 0.10%, but jumped to as high as 4.65% during the 2007-2009 financial crisis.

The LIBOR (London Interbank Offered Rate) is a benchmark interest rate that reflects the cost of funds to large global banks operating in the London money market (the world's largest money market). It represents the interest rate at which banks can borrow funds, in marketable size, from other banks in the London interbank market. 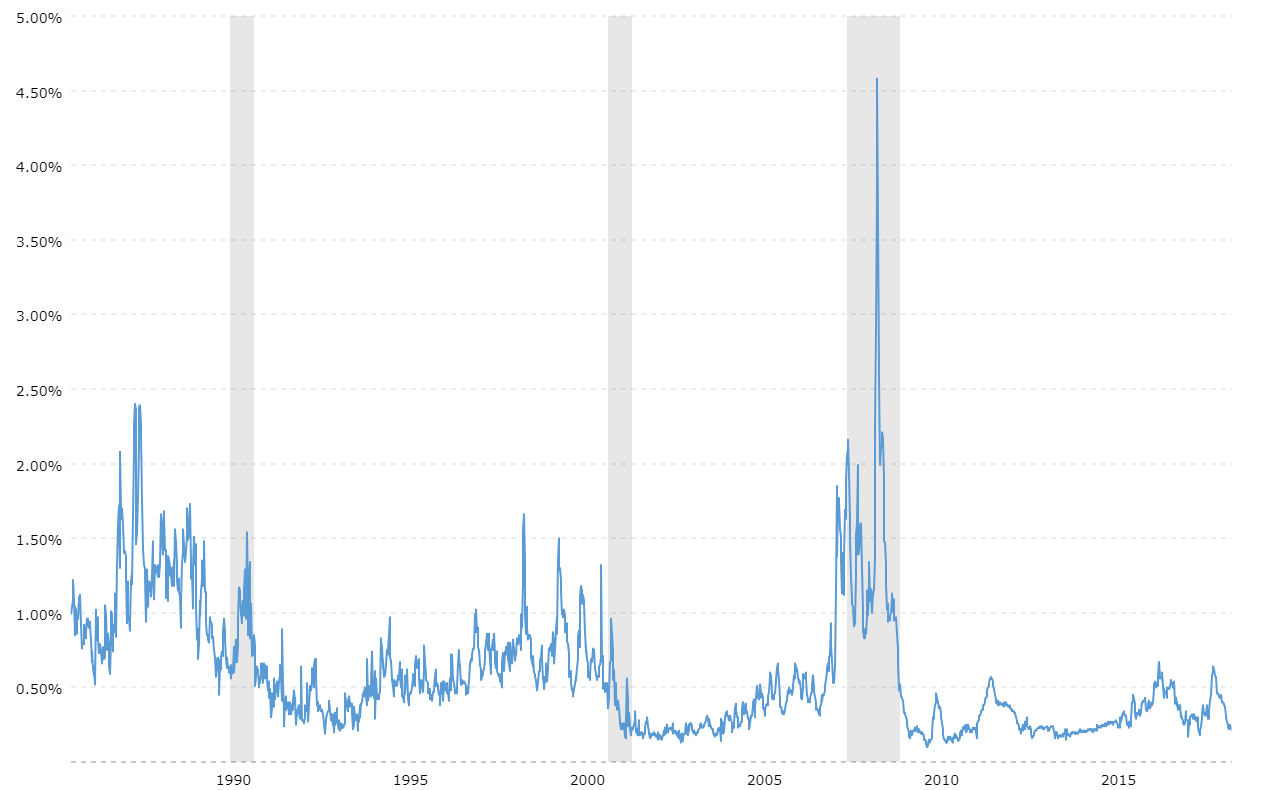 A low TED spread (<.5) shows a small amount of risk in the market. Greater than 1.0, however, and the TED spread shows uncertainty and higher risk in the global markets. In the 2007-09 crash, the spread went up to 4.5.

Where are we now in the current economic cycle? To answer that, we have to first look at the history of the U.S. Dollar.

The Dollar: "I'm falling for you."

On December 23, 1913, President Woodrow Wilson signed the Federal Reserve Act into law. From that day, bankers were free to dilute the value of the U.S. dollar by increasing its supply. And they have. With each penny that banks lend, they increase the amount of money in circulation—which means their loans are worth less than when they initially borrowed them. Since then, the value of the U.S. dollar has dropped exponentially. 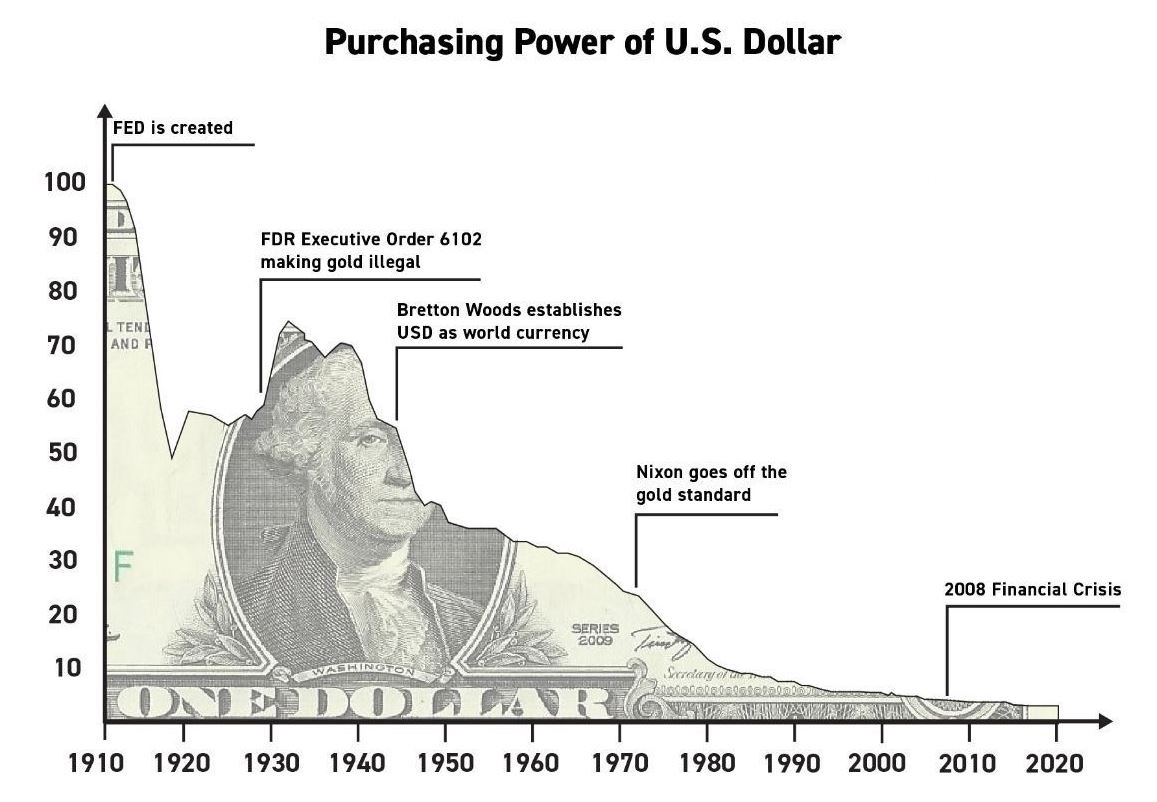 The currency's purchasing power falls at the same rate as issuing those extra dollars. Bankers dilute the value of a currency by increasing the money supply every time they lend a penny. They can do this repeatedly and call it "economic growth." Still, in actuality, all they're doing is lending money without increasing productivity—and that's why inflation continues to rise. 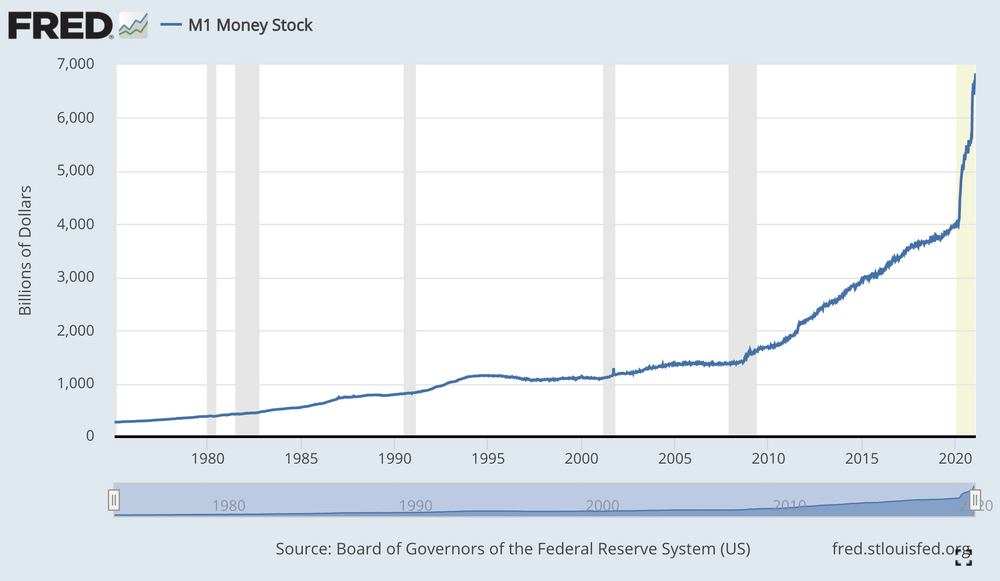 This central bank money-printing is one reason why Bitcoin has gained so much popularity since the 2008 financial crisis: Nobody can dilute the value of Bitcoin. There is 21 million Bitcoin, and no central banker can change that.

The Economy is Growing (or is it?)

Bankers say "the economy is growing," but the economy isn't getting better. They are lending more money, but with no productivity increase. Meanwhile, inflation rises, and the currency's purchasing power falls at the same rate as the issuance of those extra dollars.

To show this "Bankers-Tax" in a more visual form, divide the DJI (Dow Jones Industrial Average) with WM2NS (Adjusted money supply), and you see the actual picture. The public sees a booming stock market, but in truth, the market hasn't gone very far.

Will they Raise Interest Rates?

According to the Fed's latest monetary policy, the Federal Open Market Committee expects it will soon raise the federal funds rate. They say this is because inflation is well above the FOMC's 2% longer-run aim and a strong labor market. The question remains: is the Fed in control, or are they playing catch up?

The Federal Reserve is nothing more than a consortium of private companies. They don't set short-term interest rates; they follow them. Big banks and investment firms like JP Morgan, Goldman Sachs, Bank of America, Wells Fargo, Citibank, and the Chicago Mercantile Exchange Group set the corporate interest rates. Then, the Federal Reserve plays catch up. For example, if corporate interest rates go up in March, you'll see the federal funds rate increase by April. The Federal Open Market Committee (FOMC) has nothing to do with the government—it's a cartel.

The chart below looks back at 40 years of falling short-term interest rates from 1982 to 2020. Right now, it seems like we are at the start of a 40-year cycle of rising corporate interest rates.

If the study of these cycles is correct, we have just entered a massive growth cycle. We should see a 2-3-year period of rising short-term interest rates and a net move of 3.31% based on the average correction of the past 40 years. We should then see 40 years of rising short-term corporate borrowing costs. We are halfway through the 80-year money cycle, and if this study is correct, we're turning the corner into a 40-year growth cycle with rising interest rates.

Counting the Cost: The History of Interest Rates Over 5000 Years

Today, we live in a low-interest-rate environment, where borrowing costs for governments and institutions are lower than the historical average. It is easy to see that interest rates are at generational lows, but did you know they are also at 5000-year lows? 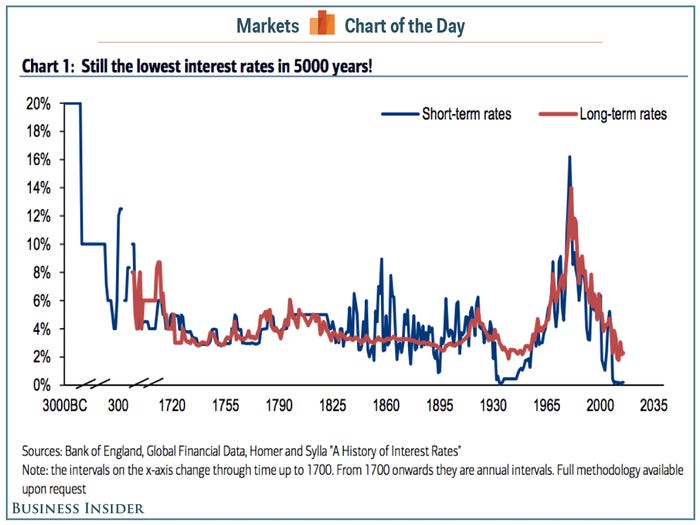 This trend may change as we enter the next 40-year millennial growth cycle and interest rates rise.

The TED Spread: A Conclusion

The TED spread is a critical aspect of the financial markets and isn't going anywhere. It's likely to become an even more important metric as interest rates rise in response to the overall 'health' of the global economy. Please educate yourself about it and keep up with how it moves and follows the corporate interest rate. It's also worth exploring the complicating factors behind T-Bills and LIBOR.

So there you have it—a crash course on the TED spread. By now, you'll be wanting to reload on that triple-shot espresso. If you take a fraction of what you just read and research further, you'll know more about the financial system than most people.

If you want to learn more about the financial markets and build your personalized trading plan, jump into a 30-day free trial at TRI and get on the waitlist for the next Level 1 education program.

See you inside the chat!
#pma4tw